This weekend is my first time attending Stanford MedX, a conference designed around innovation in healthcare. I’m here representing Doctors Who Create, and blogging about some of the things that are making me think.

One of the things that excited me about this conference is that attendees roughly fit three groups (though there is of course overlap): of the 650 or so, 1/3 are healthcare providers, 1/3 are working in design or tech, and 1/3 are patients or caregivers. 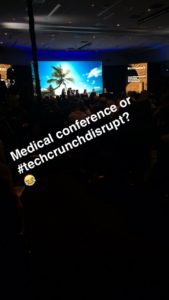 Taking a 3-day break to be in this creative medical space (not to mention walking on a campus full of palm trees) has been refreshing, to say the least. There are a lot of moments and lessons that have reaffirmed my commitment to the DWC mission as well as my commitment to working in medicine.

Here are the five things that stood out to me on day one:

I haven’t been to many medical conferences, but this is the first one I’ve been to that focuses so much on stories as a catalyst for change. Part of that focus comes from the urgency with which many patients or caregivers must share their own stories—time is a privilege that not everyone is afforded. I was especially struck by this when Bodo Hoenen describes his quest to make a robotic arm assist device for his daughter when her left arm was paralyzed; she used it to regain function faster than the expected timeline from PT/OT alone. He had his daughter up on stage with him for the presentation, and had so many pictures of him and his family fighting for her during her medical journey. I thought of how often I’ve been reminded in the hospital on how much we rely on patients’ loved ones for their care, especially upon discharge from the hospital. 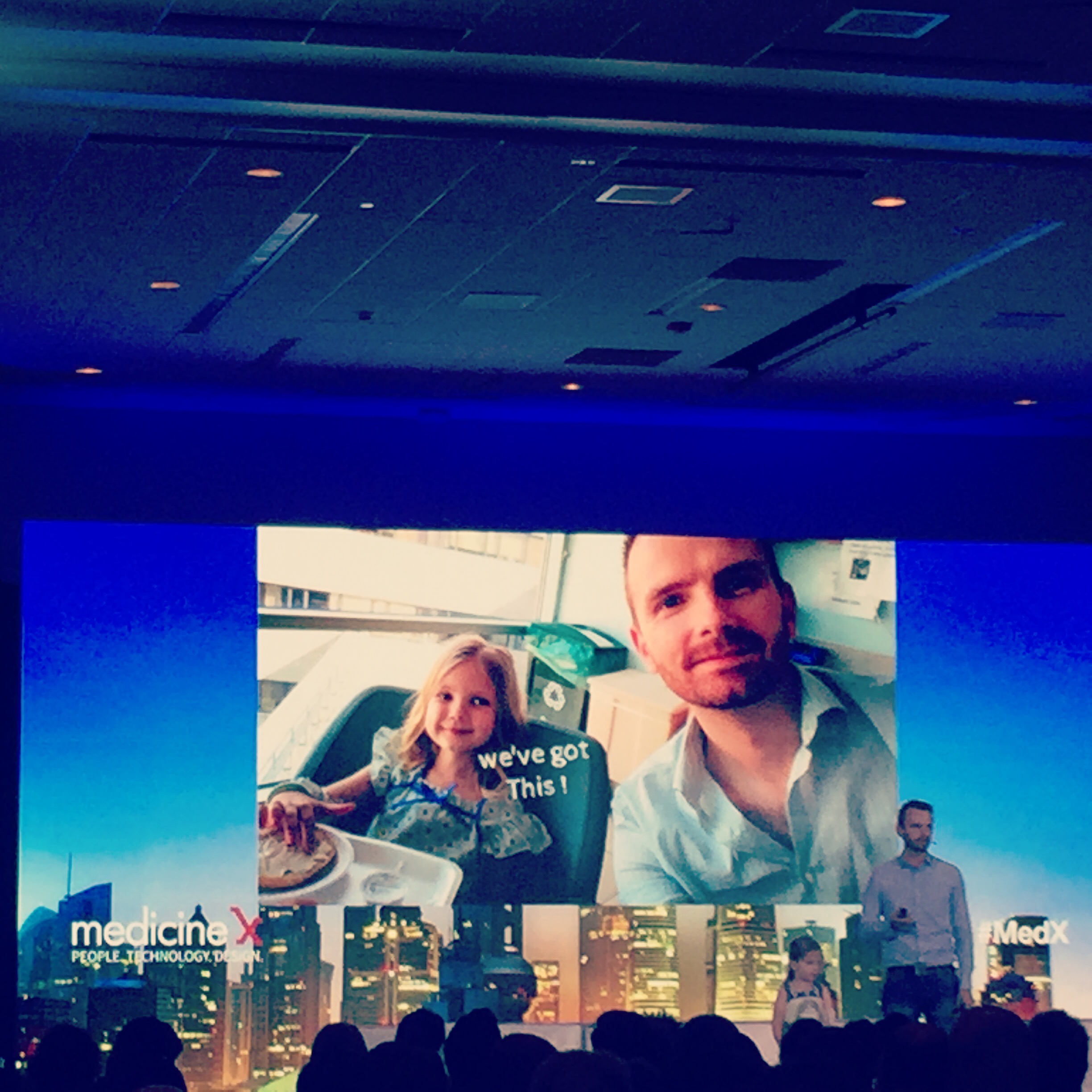 #2: Everyone has to be included.

I remember I was once on a skype call regarding healthcare wearable innovation, back in my post-bac pre-med days, after publishing an article in The Atlantic about the potential risks and benefits of using Google Glass in the hospital. I chimed in with my thought that maybe on the next call, or conference on the subject, we should include patients and get their perspectives and input on how best to use a new device like this in a setting that ultimately had a huge impact on their lives. The idea was met with apathy. Someone quipped: “Do you know what the public said when Henry Ford asked what they wanted? A faster horse.” To me, that showed hubris and ignorance; patients are in fact the people most closely aware of the challenges that they face day-to-day. Our glimpse of them in the hospital or in clinic is an important one, of course, but to think that we alone as healthcare providers could even dream up all the solutions they need is laughable. The Stanford MedX conference opposes this paternalistic attitude with an “Everyone Included” ethos. 132 patients and caregivers came here fully funded this year. At least 1/3 of the 650+ attendees are patients and caregivers. And, so many of the most inspiring talks were from this group – some from people who identify as both healthcare provider and patient. Some of my lessons learned from these people today:

I think the MedX conference should aim to have more racial diversity as part of its Everyone Included ethos – broadening this important conversation to all stakeholders. That’s something I hope to see next year, and I plan to reach out to medical colleagues and patients of color to encourage them to apply to attend.

We know this is so important in healthcare, and yet have not realized this goal. So many of us, myself included, have stories of getting frustrating medical bills, or not knowing what procedures will cost out-of-pocket when we are recommended them. Charlie Ornstein of ProPublica has published a lot on this and he spoke about the importance of providing patients transparent information to help them make decisions. In a later breakout workshop, he discussed the importance of journalism in focusing on specific stories—whether your own or a patient’s—to galvanize policy change.

#4: Psychological safety is important to success.

In the opening keynote of the conference, both Dr. Larry Chu (Professor of Anesthesia at Stanford and executive director of MedX) and Dr. Amy Edmondson (professor at Harvard Business School who focuses her work on team interactions) emphasized the need to flatten the hierarchy a bit in medicine. I’m almost ¾ of the way done with my clerkship clinical rotations in medical school, and I’ve been thinking a lot about what makes this year so difficult (to the point where stories and studies show that medical students lose more empathy and become more jaded by the end of clinical year, despite it being the year they finally get to interact most with patients). I think a major part of it is constantly learning and relearning one’s own expected role on the team as a medical student, and trying to find voice and identity in this hierarchical setting. The most emotional trauma often happens at the hands of our mentors, not at the hands of our patients. In her opening keynote address, Edmondson described a scenario where a nurse calls the on-call resident in the middle of the night, and the resident gets angry. Next time, the nurse will second-guess his or her instinct to call for help, thinking, “I might be overblowing this again.” That can lead to catastrophic effects. This reminded me of an article from Dr. Bob Wachter a few years back, titled “How Medical Tech Gave a Patient a Massive Overdose.” Part of the punch line of the story he narrates (which is well worth the read) is that not only did technology enable a huge overdose, but human fear of questioning authority—in this case, a nurse unsure about giving upwards of 30 tablets to a patient but too scared to ask more questions to superiors—also led to the error. (Read our interview with Dr. Wachter here for more about the benefits and risks of technology in healthcare).

Edmondson shared this chart about the four possible zones in a team setting (sorry it’s blurry); the best zone for learning is where there are high performance standards and high psychological safety.

I was thinking about the interns and residents I’ve interacted with during my clinical rotations so far, and the ones I’ve learned from and enjoyed working with the most were the people who 1) treated me like a peer (we are in fact mostly the same age, since I gallivanted around Taiwan and then did a post-bac before med school) and 2) encouraged me to ask even the most banal questions, sometimes even twice because I would forget the answer and even the fact that I had asked the question. These people, likely not coincidentally, were also the most beloved by patients. 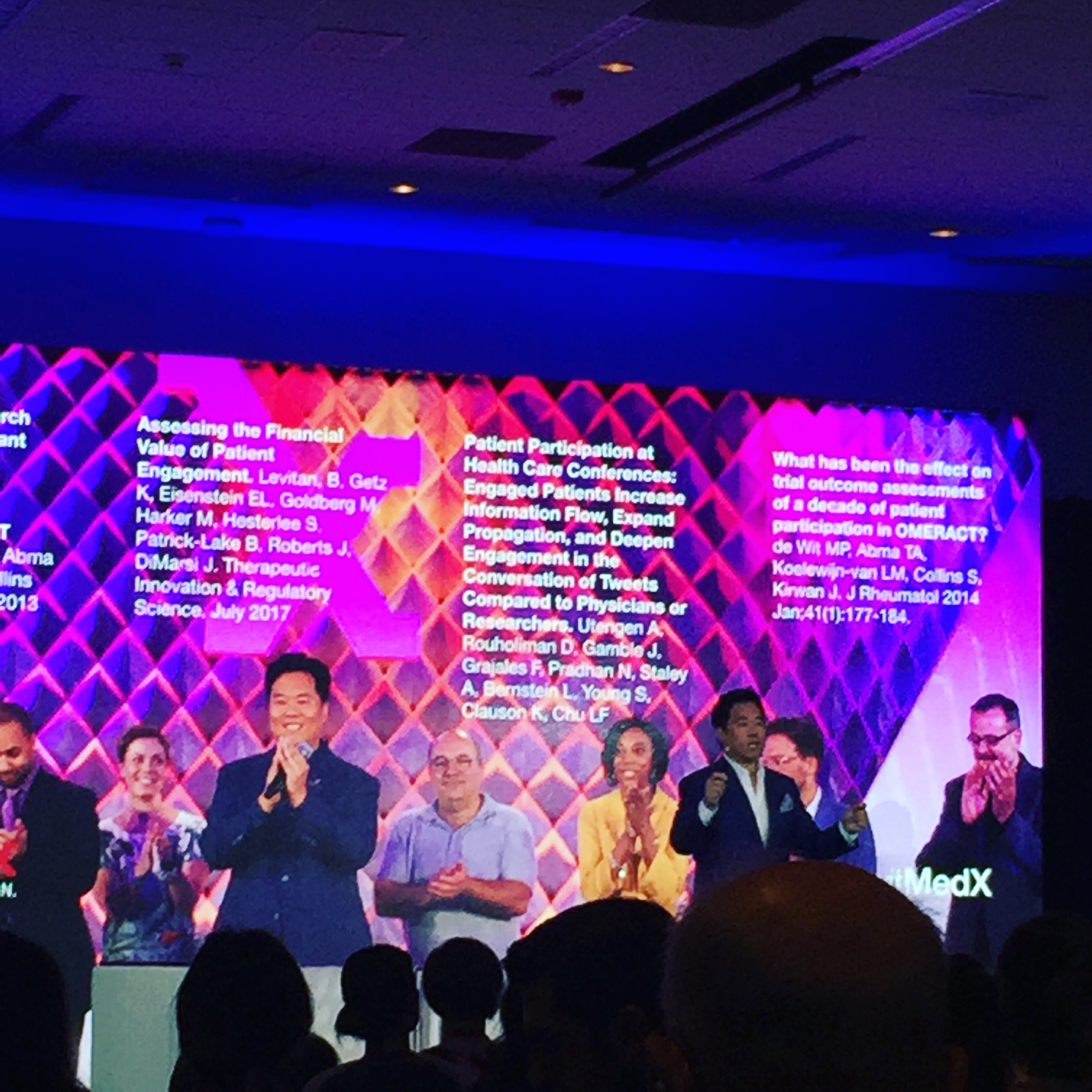 Dr. Larry Chu’s advice was that sometimes the best way to use your power is to relinquish it. I’ll be thinking a lot about that idea as I continue my training.

Last, but not least:

This we already knew (if you are reading this post, you are probably too). During the conference coffee breaks, I tried out Stanford Neurosurgery Department’s virtual reality neurosurgery headset. Through hand-controllers and moving one’s head while wearing the headset, a physician can visualize the inside of the brain in 3D. While wearing it, I zoomed right into the 3D image of a real patient’s brain, ultimately seeing the arteriovenous malformation (the medical problem in this case) looming in front of me like a tangled medusa.

The other technology I tried I out was 3D printed airways for practice intubation in medical training. A lot of the dummies we use in medical school are great for practice, but they can be expensive and not necessarily customizable. Here, EasyFit founder Dr.

Kashif Pirzada and medical student Lily Park were demonstrating how 3D printing not only was much cheaper, but allows you to model different airways, including pediatric airways and difficult airways, to lead to a greater range of practice. (And I did successfully intubate the mock pediatric airway on my first try – phew!)

Want live tweets from the conference? Follow us on twitter at @doctorscreate, and see all conference tweets with the hashtag #MedX.

About the author Vidya Viswanathan

Vidya is the founder of Doctors Who Create and is a third-year medical student at the University of Pennsylvania. She received her BA in Social Studies and a citation in Mandarin Chinese from Harvard College. She freelance writes about medicine and innovation, and has published in The Atlantic and MedTech Boston. Read her writing at www.vidyaviswanathan.com and follow her on twitter (@vidyavis).
doctorswhocreate.CSS Template 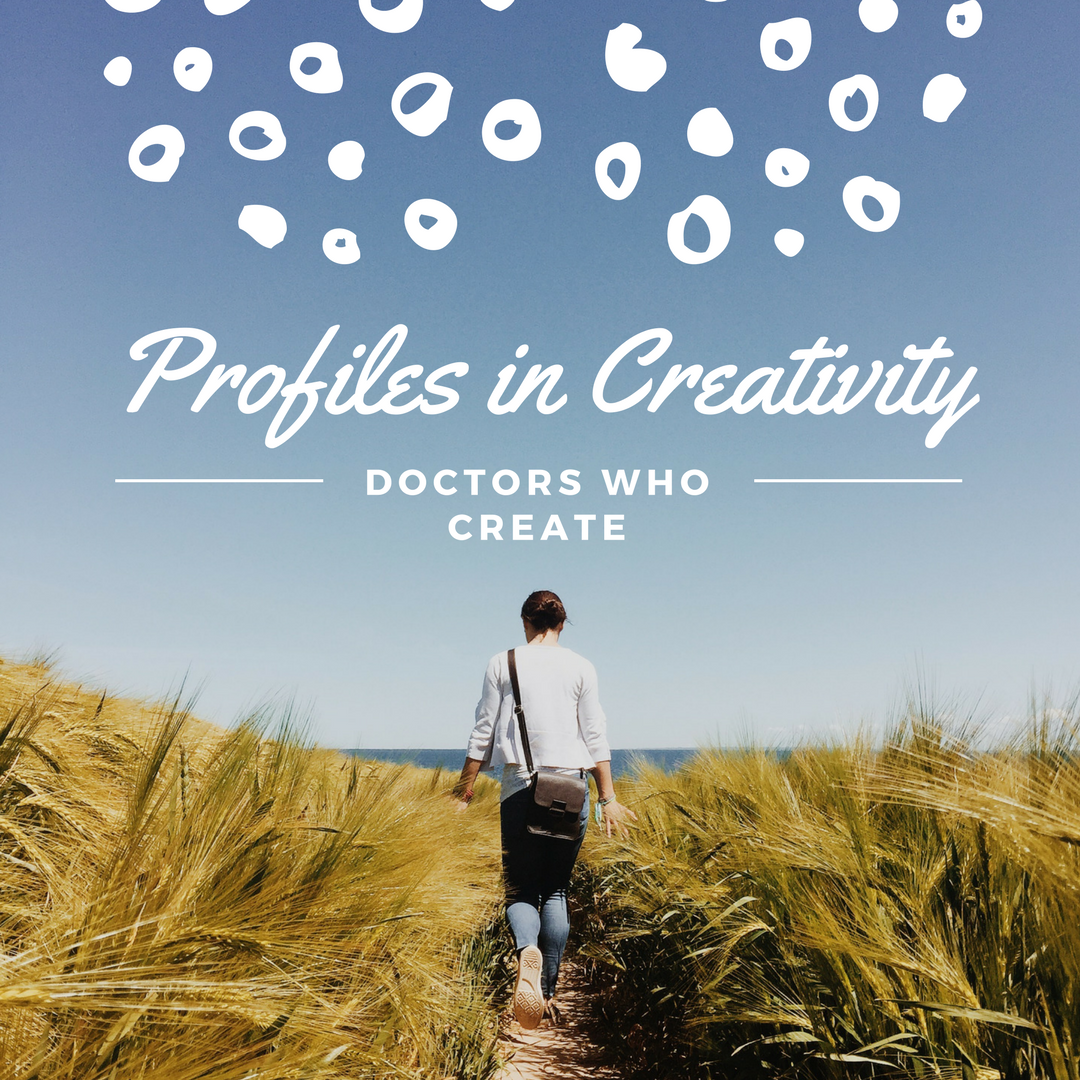 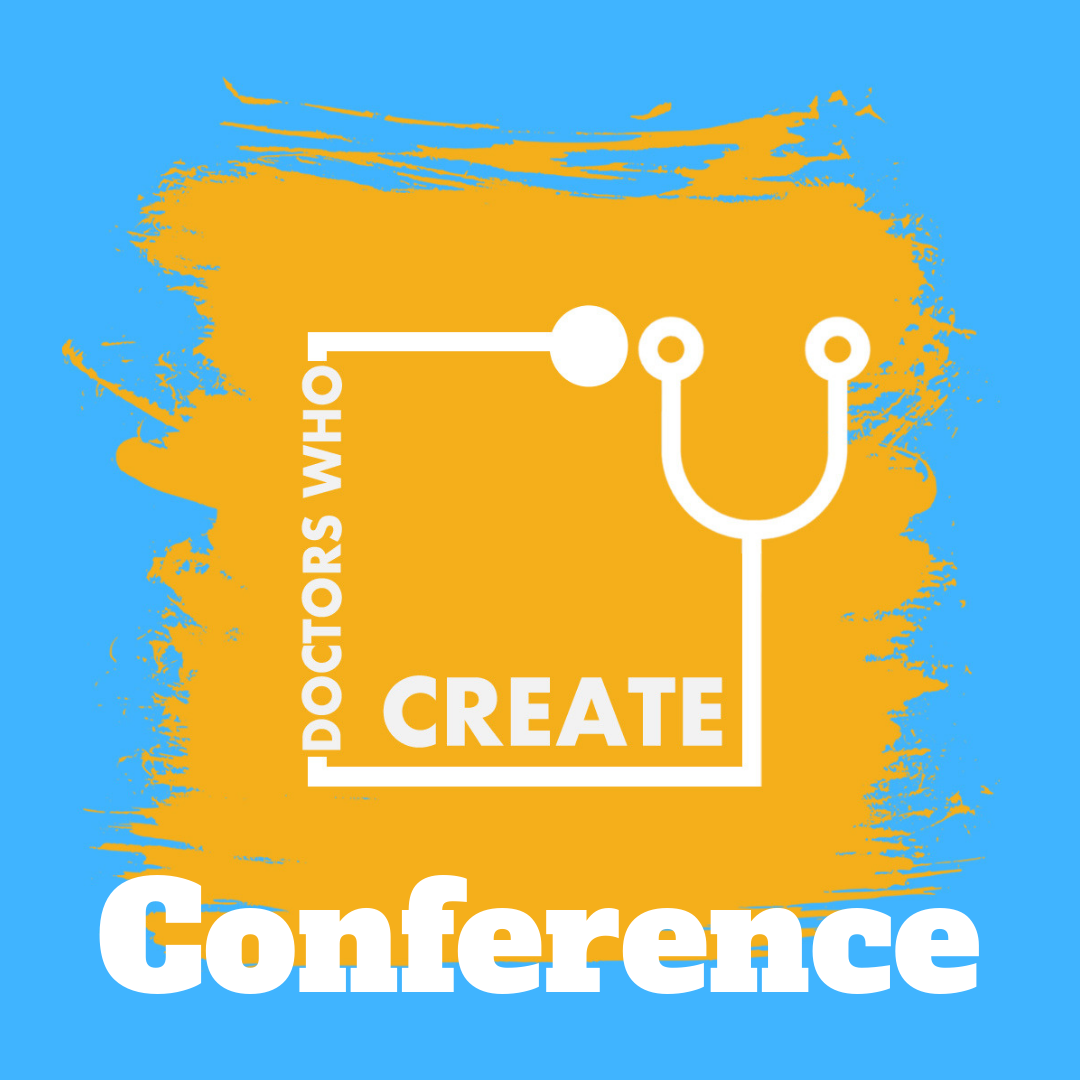